rock boats, upset apple carts, ruffle feathers. it's worth it. 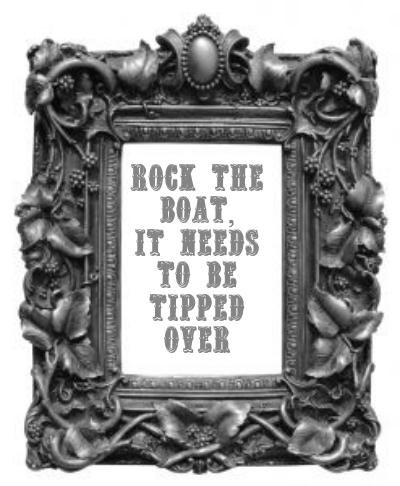 saturday was  international women’s day.  i wrote this post that morning but never got around to posting it so it’s going up today. i have written about it in the past–we just can’t stand by & the power of being wanted & belonging, and for a few consecutive years i shared why i am an advocate for women.  this year, though, after 4 different conversations in the past week all centered on the same topic, i decided to write something new because it’s on my heart in a really strong way.

women in the church have come a long way, and i truly want to celebrate that.

but when thinking about breaking chains of women around the world, i am always reminded that we have a long, way to go, too.

equality won’t drop out of the sky; we will have to rock a lot more boats, upset a lot more apple carts, ruffle many more feathers, and live with a lot more disapproval to keep getting to a new place.

in my sincere opinion, Jesus followers should be leading the way on this justice issue of equality for women around the world, reflecting equality in all of our structures and blowing the world’s minds with freedom.  but alas, instead of modeling a kingdom-of-God-here-on-earth way, sexism pervades so many of our structures and practices.

power is still way tilted against women in the church.

many seminaries are filled with women counseling students & male m.div’s.

far-too-many churches are filled with male leaders and a few women sprinkled in, and often only in support roles.

men & women are often segregated and not encouraged to be friends, brothers & sisters, alongside each other in freedom.

and all kinds of faithful & true & supposedly-not-old-school christians still don’t realize how deeply the patriarchal culture is embedded in our DNA and how easy it is to not want to be lead by a woman, to somehow not feel comfortable with women in full and equal roles, or to just be completely apathetic to the issue since it doesn’t feel like it affects them directly.

the forces against equality in the church are strong for all kinds of reasons–cultural grooves for generations, limiting scriptural interpretations, and group norms that are hard to break.

add to those the reality that we just don’t have that many examples of women & men leading alongside each other equally.

the path of least resistance is always to maintain the status quo.

my hope & prayer is that we keep cultivating a movement of men & women who are crazy enough to believe that when Jesus said “on earth as it is in heaven” he meant it was possible and that we are called as his followers to participate in creating it.

i’m not sure of all that much, but i’ll bet my bottom dollar that in heaven women (and anyone else who’s been marginalized) are not less than, that there’s no more over and under each other in terms of power, and that there’s no crappy theology that keeps half of heaven’s population stuck underneath.

if i’m wrong, i am going to be really, really mad about it for all of eternity.

Jesus blew the roof off of the old systems & ushered in the new, telling us that despite our humanness, through his spirit, heaven could break through now. and our call as people of the way was to taste it ourselves and then pass it on in any way we could–to rock boats, upset apple carts, ruffle feathers, and live with disapproval because freedom and equality–real, deep, lasting, crazy, contagious, world-shaking, life-giving freedom and equality–is what Jesus was all about.

when i hear about a woman’s calling to lead in a new and brave way, my heart leaps for her.  but then i take a big gulp, too, realizing what’s ahead for her.  how many times she will experience disapproval. how many moments she’ll question that fire God put in her heart and wonder if it’s just her pride and if she should push the feeling down and keep playing nice. how many situations she’ll be placed in where she’s the only woman in the room. how many questions she’ll get asked about her credentials and her education while most men never do.

how many moments she may feel tired of rocking boats & upsetting apple carts & ruffling feathers and wonder quietly why she ever chose this path when the one with least resistance would have been so much easier.

and then my heart leaps again, because i know that when she takes that step into what she was made to be–despite the cost–that heaven breaks through.  that the little girls of the world who need to see strong women leading will have someone to look to, that the little boys of the world will grow up seeing a better way, that the people she influences will be blessed by her beautiful, wise words that would once be silenced, and that she will know she listened not to man & the ways of this world or even “the church”,  but to God’s deep & prevailing voice that she knew she had to follow.

our freedom is not just for us.

it’s for the women of the world who need us to get free so we can participate in freeing them, too.

i always think of what toni morrison says–the function of freedom is to free someone else.

this international women’s day (a few days late), i implore all of us–men, women, young, old, to bravely keep rocking boats, upsetting apple carts, ruffling feathers, and living with disapproval on behalf of equality in absolutely every way we can.

heaven needs to keep breaking through.