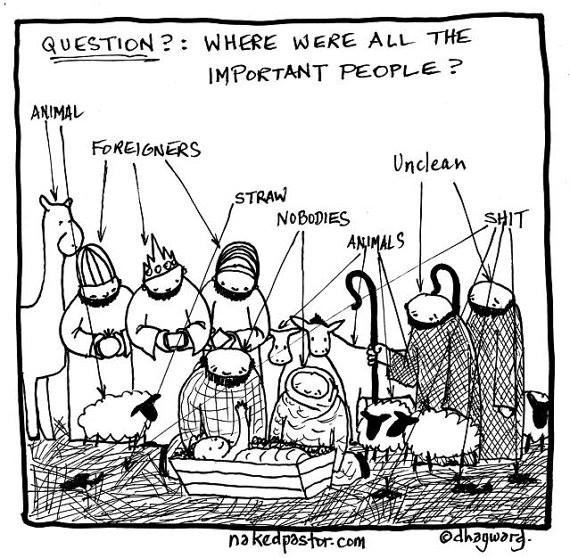 In these last few days before Christmas, I’ve been reflecting on this crazy year. On the political bizarreness we are all in the midst of, the stripping of benefits and protections for children while those on the top line their pockets, the reality of our systems being tilted toward undistributed power, the ongoing division within Christianity that is rocking not just “the church” system but countless hearts and souls as well.

I am continually struck with the tension between those in power and the margins. When we are dedicated to the downward ways of Jesus, we are destined to travel a bumpy, often-lonely road.

As the years pass, I have moved from being an “insider” to an “outsider” in many of the circles I used to travel in. My shifting faith, my rocking the boat on issues of justice that I just can’t shake, my unwillingness to ascribe to the status quo as a female leader has come at a cost.

I know many of you are in the same boat.

We miss the sense of belonging we used to cherish.

To feel like we have a clear place, a defined group. To feel like we are part of something important. To have meaningful relationships that connect us to a bigger story.

And sometimes we equate belonging to feeling like an insider.

In the early stages of my faith, one of the biggest draws for me was becoming part of a family, a group, a place to belong. There was something about Christian connection that I loved. The homogeneity, the similar passion and focus in the same direction, the clear set of here’s-what-you-listen-to-read-believe-and-do. I loved the certainty, the conformity, the affiliation.

At the same time, I’ll admit that as much as I tried to be an insider, I always sort of felt like an outsider.

But I certainly tried. Oh, how I tried! I worked incredibly hard not to feel like an outsider, to find a place, to find a way to truly belong.

To somehow be important.

I got sucked into voting a certain way, believing a certain way, saying certain things, and catching the wave of ascent that everyone around me was riding. Separated from others, focused on “connection with God and God alone”, and in the crowd that was on “God’s side.”

It felt good on one level because it gave me a sense of belonging, being on the inside.

But the reality was that as soon as I stopped conforming, I immediately became an outsider. And not just pushed to the fringe, but all the way out. Systems can be that way. They are powerful structures that shape human behavior and can be used for good or for not-so-good (and sometimes even evil).

One of the trickiest parts of my faith shift is that I didn’t just become an outsider of the particular church I left, but I became an outsider in the strain of evangelical faith that I had tried hard to be part of for so long.

Being an outsider is tough.

I no longer fit into one particular world. I am a post-evangelical-mutt and while I’m grateful for it, it is hard to never all the way fit in anywhere.

And I’ll admit that even though I’m grateful to have healed into a new place over the years, it is still sometimes lonely, weird, confusing.

I truly don’t fit into any one group anymore.

I can’t align with anything all-the-way like I used to.

I can’t compromise my integrity in order to be part of particular groups.

I can’t be something I’m not.

But here’s what I also know–most all of us feel like outsiders in all kinds of different ways, too.

We are in good company.

And that’s why I love the weird, wild, doesn’t-make-sense Christmas Story so much. The upside-down ways of Jesus remind us that trying to align with the world’s power, a group’s power, a religion’s power, will not help us. It will try to draw us in and allure us. It will try to tempt us to strive and try and do-things-we-really-aren’t-that-into in order to belong. It will try to make us work to feel important.

The cartoon above is from my friend David Hayward’s collection. I bought one for myself a few years ago, too.

I love remembering that in one of the most significant stories in history, the important people weren’t there. The insiders weren’t there.

What I do know is that Jesus’ ways were always tilted the opposite direction from worldly power, from comfort, from religiosity, from blind conformity, from self-protection.

In a world–and “church”–often being lead, controlled, and legislated by a lot of “insiders”, I have a feeling there are a lot of us who feel like outsiders this Christmas.

Some embrace it with ease and feel comfortable with it.

Others struggle with the feeling and long to feel “inside” of something again.

As we approach Christmas Eve, I hope those of us feeling outside can tuck ourselves inside this story, this image, in some sweet and simple way.