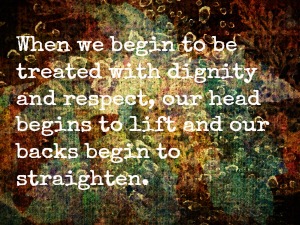 Sometimes I get calls from women asking for help to get out of an abusive relationship. Skittish, scared, and filled with shame, they reach out and share their story. It’s so brave.

Some are rich, some are poor. Some are educated, others have never graduated from high school. Some have kids while others don’t. Some have husbands, others never have. Some are leaders, others are followers. Some call Jesus their God, others lost their faith a long time ago. Their circumstances might be different but their stories are the same. The thread that binds them together is that life circumstances and relationships have somehow stripped them of their worth, dignity, and voice.

They’ve been devalued, silenced, used, controlled, diminished to the point where their heads are hung low and their backs are bent.

I have heard some say that there’s not a war on women. They claim that is rhetoric that paints the situation to be worse than it really is. These people don’t know these women in real life, as friends, as sisters, as daughters.

There’s no doubt, women have made great strides over the past chunk of years, finding greater equality in many professions and gaining ground on freedom. But underneath the surface a deep and insidious system still exists that is tilted against women. Sexual addictions and exploitation of women are rampant. Our safehouses–from downtown to the suburbs–are overflowing with women fleeing abusive relationships. Local social service agencies are overwhelmed with desperate women struggling to feed their families with no support from their kids’ fathers. Most all the women I know are working more and getting paid less. Many churches continue to perpetuate “women are under men” structures and methodologies.

Jesus says that the Kingdom of God is available to us now, and that part of our responsibility as Christ-followers is to participate in bringing heaven to earth.

To me, that means we’re called to be the lifter of heads and the straighteners of backs.

To call each other to be all we were created to be.

To nurture a spirit of equality, justice, mercy, love, and hope in the spaces and places we find ourselves in.

To restore dignity where it’s been lost.

As a pastor and leader in Denver I am often saddened at how many women and people on the margins are experiencing oppression, depression, and disconnection from the kind of life Jesus said was possible here, now.

I remember in 2006 when a dear friend told me honestly, “Kathy, you are in an emotionally abusive relationship with this church.” As a woman who worked with abused women, it feels crazy to think I couldn’t see it, but the truth is that I just expected that is how I should be treated in church leadership. I was told I should be grateful, that I had it better than most women in the church, that the grass wasn’t greener (it is).

Honestly, I believed them. Until that same friend, who is good at lifting heads and straightening backs, told me I deserved better.

That there was another possibility for me.

It started me on the bumpy path toward greater and greater freedom, a path that has lead me to intersect with a wide range of women who feel stuck, alone, and longing for something better. From suburban women suffering from loneliness and depression in their beautiful homes to mommies lined up at food banks, women are struggling to believe they matter.

Shame is a powerful weapon of darkness that tells so many that they are not good enough, worthy enough, you-name-it enough.

And a significant part of the problem is that “the church” has perpetuated some of the problem. It sometimes is one of the most insecure places  on earth, cementing many damaging messages instead of freeing us from them.

At this point I honestly don’t think words mean anything anymore in the conversation on equality. Telling women or anyone on the margins that “they matter to God” won’t make a difference on its own.

What seems to be making the biggest difference is actually seeing and experiencing something different.

When we see women freely telling their stories and using their gifts, something shifts.

When we see other women who have found their way out of bad situations and are experiencing hope, it gives us hope, too.

When we experience men as safe people, as friends, willing to help and listen and care, deep wounds of neglect or abuse can begin to heal.

When we begin to be treated with dignity and respect, our head begins to lift and our backs begin to straighten.

Our heads begin to lift and our back begins to straighten.

I think that’s what the church is supposed to participate in doing for all people who know what it feels like to be diminished, disrespected, and undervalued (not just women)–helping to lift heads and straighten backs.

My hope is that we will keep intentionally work at modeling a better reflection of the body of Christ where both sexes are valued equally and called to freedom, where women’s voices are honored as much as men’s, where power is diffused and shared across all shapes, sizes, colors, and experiences. That we live as free as we can as equals, friends, brothers and sisters, co-creaters of the kingdom of God alongside each other instead of under or over the other.

To help each other lift our heads and straighten our backs.

ps: I am grateful to co-pastor with my friend who was the one who told me another way was possible. This Thursday he pulled together a Women’s Listening Party, a place to listen and learn what it’s like for women in the church. If you live in Denver and are able to participate, know you are welcome!