"whatever you do, don't work for a church" & other lingering notable quotables 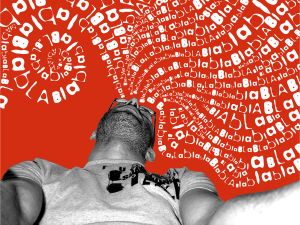 i was walking in the airport the other day lost in some weird travel trance when i remembered a random thing someone said to me years ago that i’ll never forget.  no idea why it drifted across my mind, but the words of a placement counselor when i was at denver seminary in 2001 flashed before me. (side note: i had just started in the counseling program there–i ended up changing to spiritual direction in the end. i’m a terrible therapist. “50 minutes & see you next week” was a bad combo for me!) anyway, after taking thousands of dollars worth of personality and gifts inventories, we sat in a room where he interpreted the results as part of the training & mentoring component of the program.  here’s what he said “your strengths are mercy and leadership.  it poses quite a dilemma, though, because these tests indicate you’ll be bored as a therapist.  and at the same time, this feels pretty clear:  whatever you do, do not work for the church.  they will not know what to do with you!”

yeah, i didn’t listen to him.  and yeah, he was right.  but that’s okay.  i ended up here now, not “working for” a church but rather being part of shaping a community that isn’t afraid of women. as i was reflecting on this moment, i started thinking about other weird and powerful things people have said to me over the years that have significantly shaped & formed me, the statements made now and then that ended up being far more impactful than the deliverer of them probably ever realized.

here are a few others that came to mind:

“don’t ever tell anyone about this.  no one needs to know.  they won’t understand & they’ll just use it against you somehow.”

– a significant voice on the day of my abortion when i was 17. i let those words guide me for many years & they could have easily ruined me had it not been for God’s voice being stronger.

“you figure out where you want to go to college and i’ll figure out how to get you there.”

– my single mom who was making $28K a year and really did live up to her word.  i am so grateful for the cycle of uneducated-ness to be broken in my family & i attribute it to this. (it’s really cool, too, that a few years later she finished her degree & then went on to get a master’s degree a few years ago).

“you need to choose between your career & your marriage.  it will be really hard to have both.”

–  my boss at the phone company a few years out of college. i was just finishing graduate school and was being considered for a big promotion but engaged to jose at the same time (yeah, my boss was seriously old school).  it was awfully confusing to hear when you’re pretty much alone, young, being groomed for upper level management & deeply in love with a navy pilot.

“i really think you’re supposed to be in this group. it’s not a bible study. it’s not a therapy group. it’s just a group of women trying to get more honest about our relationship with God and other people. we don’t really know what we’re doing, we just know we need to do it.”

– my dearest friend elaine, cornering me in the church bathroom during a sunday school break before i even knew who she was, inviting me to be part of a women’s group that changed my spiritual journey forever.

“daughter, you are forgiven”

– Jesus, when i was really intentionally seeking healing from the shame of my past. it was the first time i really felt it & since then i have never gone back to the long-held feeling of unforgiveness & paralyzing guilt.

“well, that’s what the problem was–two healthy baby boys are in there!”

– the doctor when he popped on the ultrasound after a test for birth defects for what we thought was one baby came back positive.  i was braced for the worst & never in a million years expected that he’d say that (or that i’d be a person who had 5 kids!)

“no, i’m not calling you to ask you if you know someone else for the job. i’m asking you to do the job.”

–  a friend who called me to see if i’d come on staff as a care pastor.  at that point i was a stay-at-home mommy and volunteer extraordinaire so it felt so out from left field & it honestly took me a while for it to register in the conversation, “you mean, you’re calling to for me, are you sure, really, come on, is this a joke?”   little did i know it’d change the course of history for me, it was where i really discovered more clearly what i was passionate about & met so many of the friends who have since become family.

– jose, after my entrance into crazy-full-time ministry forced us to reckon with just how imbalanced our marriage was when it came to pursuing passions and taking care of our home & kids. this was the moment i believe we truly switched to an equal marriage in practice, not just theory.

“this is go-time.  this is our march madness & i need my starters in the game. you have 8 days to think about this situation.  then you need to be able to sit across the table from me and answer ‘yes’ to the following 3 questions:  1) that you will submit to my authority 2) that you will submit to the authority of the elders and 3) you will perform all the functions of your job.”

– the newly hired lead pastor during my downward descent from a megachurch staff.  in that moment it became crystal clear, um, i am not sure this is going to be such a good idea anymore.

“come on, let’s do it.  the dream is possible.  what’s the worst thing that can happen?”

– my friend & teammate, karl, trying to encourage me to go for it when he knew i was terrified to form & co-pastor a new little faith community that became the refuge.

these were just a few that came to mind when i was reflecting on my journey.  i am wondering what some life-altering, defining statements, notable-quotables have been for others?

words are powerful. i am sure that some of the people who have said these things, extended some of these invitations, have no idea that they somehow influenced my journey.   this has made me wonder, too, how words i have said to people have impacted them directly & indirectly and i would never have known.  words shape and form the direction of our lives in so many ways.  they stir up what might be.  they close doors. they open others.  they cause us to think. i am thankful for the good ones, the bad ones.  the ones that were clearly from God, and the ones from people that God somehow redeemed.