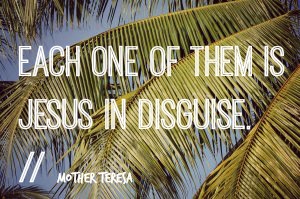 yesterday was palm sunday and we had a really fun & sweet palm sunday dinner together at the refuge, one of our annual traditions. one of the reasons i like this particular day in holy week is it’s the time when we remember the anticipation and excitement of Jesus’ riding into jerusalem on a donkey to fulfill the prophecy and save the day. so many thought that this was their moment, the time when the messiah, the king, would topple the power structures and save the day.

little did they know that what they expected would turn out so much different just a few days later when instead of kicking ass and taking names, he’d humbly die on the cross right before everyone’s very eyes.

God does the weirdest, most unexpected things.

it got me thinking about the perception of christians in this world, especially in the west right now. goodness gracious, we have a bad reputation. and for good reason.

we are often known for being judgmental and exclusive.

we are often known for taking care of ourselves, not others.

we are often known for our “biblical” interpretations about women in leadership, the GLBQT community, and those of other faiths that perpetuate division and oppression.

we are often known for abusing power & creating celebrity christian empires that eventually fall because of corruption or adultery or abuse.

in fact, i think that’s what the world has come to expect about us as christians–the worst.

and it makes me sad because there are so many amazing christ-followers all over the place doing so many wild & beautiful & underground & unnoticed & tangible & scary & brave & glorious things on behalf of healing and reconciliation.  their stories often aren’t the ones being told. and often, they don’t tout their christian-ness.

sometimes when i am talking to public agencies or organizations that aren’t faith-based, they admit that their impression of christians hasn’t been the best. they’ve come to expect that we aren’t very safe, don’t play well with others, and are mainly interested in evangelism, not unconditional caring & practical help.

this holy week, i am always reminded that Jesus’ ways and the ways-of-the-church-that-have-adopted-the-world’s-power-mongering-and-division-y ways are so contrary.

Jesus, from birth to death to resurrection to reappearance, is all about the unexpected.

that’s what i love.

and it makes me think that that is what we should be giving the world as his followers, too--the unexpected, not the status quo.

and the unexpected these days means:

showing up when no one else will.

touching lepers, dining with the riff-raff, and advocating for the one-about-to-be-stoned-for-their-sin

playing well with others.

caring for the poor instead of the pretty and popular.

empowering women and others who have been considered less-than.

listening instead of talking.

receiving instead of just giving.

sharing our doubts instead of only our certainties.

having fun instead of being so freaking serious all the time.

sharing our broken stories instead of just our fixed ones.

happy holy week. you don’t have to call it that or practice it or feel connected to it in the traditional way to play.

i suppose that’s unexpected, too.

ps: my friend christine sine always has all kinds of lovely treasures for holy week on her site. check them out here.  also, a few different people shared a new resource with me–the liturgists–that has some wild and beautiful liturgies on it. enjoy!