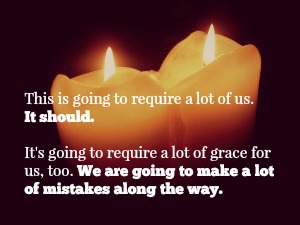 It’s been an interesting paradox of a Thanksgiving week. The joy of having our kids all home for the holiday and not wanting to think of anything other than being together, contrasted with the reality of the painful events in Ferguson and what it means for all of us.

As a white woman of privilege, I’ve been thinking about some of the thoughts, feelings, actions or non-actions a lot of us seem to be wrestling with right now.

I’m wondering who might relate to some of these thoughts & feelings swirling around in our heads & hearts this past week?

Feeling terrified to post anything on Facebook for fear of who’s going to say what in response.

Reading comments on other people’s Facebook pages and beginning to feel sick to our stomach as we see how ugly it can quickly get.

Feeling bad for posting fun Thanksgiving pictures amidst others’ pain and grief.

Confused by the conflicting responses about the grand jury evidence and don’t know what to believe.

Feeling guilt for our white privilege.

Not sure what to do or say because we don’t want to offend the realities of our black brothers & sisters.

Uncertain about reading almost any and all media coverage because it is all feels inflammatory.

Realizing that even though we want to believe we’re not racist, we know we must embrace we actually are and that our racial biases have contributed to the brokenness.

Wanting to honor the work of police officers and the way they protect, serve, and put their lives on the line every day.

Desiring to get involved and show our support but don’t want to appear like a Ferguson band-wagon person who only joins the wave when it’s popular.

Completely overwhelmed by how big the problem is and don’t know what we’ve got to offer or even where to start.

Wondering where the safe and healthy spaces are to actually talk about this, to listen, learn, and reckon with our real fears and feelings without it devolving into an ugly debate.

Filled with a deep desire to be a participant in change but not sure how.

Do you relate to some of these?

Last Monday night Jose and I were down in Denver at the Shorter AME Church for the announcement of the grand jury indictment. We went to listen and learn and stand in solidarity as best we could in that moment, not knowing which way it would go. I felt so nervous walking in. We had never been there before; I honestly had no idea who was coming or what it would be like and was happy to see a mix of young and old, black and white, men and women, and a few dear friends from around Denver. It was intense, painful, filled with grief and reality and passion. We listened to many amazing men and women and youth sharing perspectives that needed to be heard and said. To me, one of the most powerful moments was the 4 1/2 minutes of silence right after the indictment and then a time of prayer with all the clergy present, a mix of different denominations, shapes and sizes. After a few stories, anyone between the ages of 15 to 30 were asked to tap the faith leaders out and replace us up front. Yes, the youth will lead us on this one. Our job is to step aside and support them as they step into their leadership. And there’s a lot of work to be done.

On the way home, the four of us processed together and felt the heaviness that many are feeling right now. The reality of broken oppressive systems. The reality of the pain of brothers & sisters whose lives aren’t mixed up in ours in real life. The reality that we live in a predominantly white middle+ class conservative neighborhood where there are strong beliefs different from us. The reality that even though Jose is Hispanic and our kids are brown, we are comfortably distant from a lot of this daily reality.

We all know something has shifted through Ferguson, things have tipped, and “comfortably distant” is thankfully gone for the USA.

Real change, real peace, real healing, real equality will be a bumpy, brutal road, one that was started a long time ago and we have the privilege of participating in today in new ways.

And oh, this is going to be rough.

The deep grooves of racism in this country are built on generations of division, oppression, and fear. They are not going to go down easy. Take a quick scan down the comments in almost anyone’s Facebook posts and it’s apparent how deep the division and differences are and how terrible we are at non-violent communication. “The church” is all tangled up in it, too, a huge conscious and unconscious perpetrator of division and separation instead of the healing and break-down-all-the-walls-between-us force it’s supposed to be.

There’s just no way around all of this feeling uncomfortable. Vulnerable. Hard.

And because we’re humans we usually want to find some kind of short-cut, an easier way, a simple surface solution.

But there’s no short cut or avoiding pain on this one.

It’s going to require a lot of us. It should.

It’s going to require a lot of grace for us, too. We are going to make a lot of mistakes along the way.

But I have hope, too, that over time we can indeed become participants in justice in small & big ways in the kinds of ways Jesus calls us to.  That we won’t let our fears completely paralyze us. That friends & allies & advocates & community cultivators will be born and re-born all over the place.

That we will let our discomfort, our confusion, our lack-of-knowing-what-to-do-next be okay because it’s all part of learning.

God, you know our hearts. You know we have a lot to learn. Please teach us & show us the way forward.