making another's pain in their heart our own. 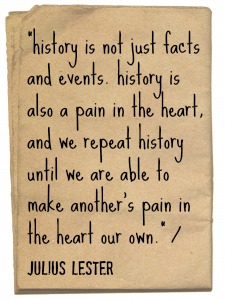 [dropcap]W[/dropcap]e got back last night from our fun adventure, celebrating my third kid’s high school graduation a little early.  the passport debacle was redeemed and we had a great time (and yes, will be getting the twins passports renewed this week). it really was a perfect & annoying test for my river image for 2013 & now 2014. we definitely rolled with it.

on our trip i read one of the best books i’ve read in a while–the invention of wings by sue monk kidd.  i had no idea what it was about, just thought it would probably be a good read and i really wanted to get lost in a story.  whoa, it was excellent!  it was a mix of fact & fiction, a novel that was based on the grimke sisters , two privileged women from charleston in the mid 1800’s who became outspoken abolitionists.  their unladylike fight for slaves’ freedom ended up getting all tangled up in freedom for women, too. and actually that got them into even more hot water than advocating against slavery, which is telling.

i won’t go into all of the ins and outs of the story as it’s worth reading for yourselves, but i was reminded, yet again, how truly uphill the road to freedom & equality always is. pushing against power & the status quo, battling fear and ignorance, and calling for the dignity of all people to be valued shouldn’t be rarities in the christian faith.  it should be central.  we should be known as the free-est, most equal, most advocating-for-justice-for-the-oppressed, most loving and merciful people in town but so often we are known for just the opposite.

and unfortunately we live in a very broken, fear-based world. hearing about the outrage against the america the beautiful and cheerios interracial marriage superbowl ads made me feel a little sick. when i told my kids about the racial slurs toward the cheerios commercial, they responded, “oh, that is so not okay.”

that is so not okay.

there are many parts of equality struggles that are “so not okay” but we often keep plugging on because that’s just the way it’s been. in the story of the grimke sisters, to stand up against slavery in a culture that was built on it meant paying a deep cost. they were ostracized, shamed, encouraged to come back to the fold, silenced, threatened, and definitely dismissed.

yet, their faith & passion for the dignity and equality of all fueled them forward.

it’s fascinating, too, that most of us have never heard for them before. i know i hadn’t, and in the back of her book sue monk kidd shared how she stumbled upon angelina and sarah grimke while researching and couldn’t quite shake them afterward. there are countless men & women whose courage and efforts in small and big ways were and are part of important changes in the course of history but their names will never be mentioned specifically.

yet, they made sacrifices that changed history.

they sat next to african americans on the bus when no one else would.

they didn’t wait for the “right time” to come before speaking against inequality.

they hosted ice cream socials between unintegrated churches that had never happened before.

they encouraged their wives to vote when many of their friends first refused to.

they refused to be part of churches that don’t support women in leadership.

they stopped giving money and time and support to organizations who discriminate.

they stood strongly by their children when they came out as gay against others people’s advice.

they supported marriage equality even when it cost them their ministry jobs.

they advocated for the person getting bullied.

they bought a woman’s freedom from trafficking.

they openly expressed their views on all kinds of equality issues with friends and family instead of standing silent.

they shared stories ranging from around dinner tables to public forums  to raise awareness of the realities of inequality and oppression.

they were willing to be people who educate, advocate, and agitate even when it’s not popular in the circles they run in .

most of all, these history changers–small & big & known & unknown–were and are willing to engage with another person’s pain and make it their own.

in the invention of wings, these words from julius lester have lingered–

to engage with another person’s pain and make it their own.

this is the most important ingredient in the fight for freedom & equality for all. we must engage with another person’s pain and make it our own.

when we do, we are forever changed. it’s easy to be against homosexuality when we have no gay children or friends. it’s easy to not understand the big deal about women in leadership in church if we’re not a woman with a calling. it’s easy to think human trafficking is far removed from us until you hear a story from our own backyard.  it’s easy to think we’ve come a long way on racism until we a friend tells about their experience with it in the year 2014. it’s easy to think people should just pull themselves up by their bootstraps and find their way out of poverty until you hear their story on the way to visiting social services.

may we be people willing to make another’s pain in the heart our own so history can be changed.

there’s a world crying for hope, for freedom, for equality, for their dignity to be restored, for someone to care.

we must press on.

we must listen well.

we must open our eyes and ears and hearts and hands.

we must be brave.

and we must find ways to make each other’s pain our own so we can play our small or big part in changing history–for one, for many, for whoever needs help finding some kind of freedom.

God, give us courage to stand up to what’s so not okay.

ps:  i can’t believe it’s already february, but i’ve got a post up today at sheloves magazine for the down we go column i write there every month. it’s called down we go: we belong.  here’s to creating places & spaces where we feel a greater sense of belonging.