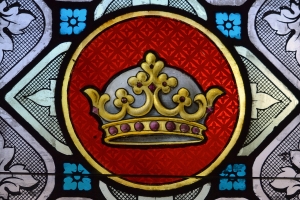 yesterday was palm sunday.  i love the easter story; in fact, this week is my very favorite week of the entire year.  like advent & the anticipation of Jesus’ birth, i love the upside-downness of it all.  Jesus, the promised king, the messiah, all grown up, enters into jerusalem to a roar of “hosannas!” and the thrill of impending victory.  people were excited, inspired, drawn, hopeful.  they were ready for him to kick ass and take names, to topple the empire and restore justice.

he’ll make all that was wrong right.

but as the week progresses, things radically shifted.  he had stirred the pot too strongly.  he’d upset too many apple carts.  he challenged the status quo far too deeply.

he started doing all kinds of un-king-like things.

he touched lepers.
he dined with sinners.
he called out religiosity on its hypocrisy.
he told everybody they needed to be last, not first.
he said that love trumped all.
that the way up toward God was to go down to the places of real life, real pain.
that God desired mercy, not sacrifice.

and then, next thing they knew he was washing feet, talking about dying, telling us we needed each other in all of this.

wait a second!  this wasn’t the kind of king-like behavior we were hoping for.

things went bad to worse after the foot washing.  he was arrested, tried, and sentenced to die.  and then, instead of getting off the cross and saving the day that way he actually died.

right there in front of them.

he was sacrificed. he appeared powerless, defeated.

all that excitement for nothing.

some king he was!

sure, we know a few days later, the tides turned yet again and he wasn’t dead but alive.  appearing to his friends.  telling them some of the same crazy things he had been telling them before he died.  the spirit of God, alive and well, at work in people’s lives ever since.

but the truth is that it’s always been a confusing story.  one that makes us scratch our heads a little and wonder “why did God choose to do it this way when there were a lot of better, more clear, easier-to-understand, more really-king-like options?”

as i reflect on the beginning of holy week and our journey toward easter, i think so many of the same human dynamics are at play today.  sociology is powerful.  our demands for strong, powerful, charismatic, certain leaders is alive & well.  just look around at big rocking churches.  there aren’t a lot of people leading them who are washing other people’s feet, dining with lepers, and telling mind-boggling, confusing stories that has everyone shaking their head, going “huh?”

rather, what makes most of them strong is their certainty, their power, their charisma, their “king-like” qualities.

my theory is that even though we know Jesus is the real king, we are still desperately looking for one here that makes more sense than Jesus.  pastors, leaders, podcasters, writers, speakers, someone to tell us what to do & think, what’s okay & what’s not okay, what the scripture says & doesn’t say, who’s in & who’s out.

we are drawn to power & charisma, not the beatitudes-infused kind Jesus embodied and preached, but a worldly power that keeps us underneath so we can feel more protected, comfortable, contained.

we are addicted to inspiration.

but the gospel was never supposed to be protected, comfortable, or contained. or inspiring in a sit-and-listen-and-feel-better-afterward kind of way.

what makes it the gospel is its wildness, rawness, unexpectedness, and challenge to us.  that God shows up in the least likely places instead of the most.  that he pierces the darkness with unexplainable light. that we should follow his weird & wild ways, not men’s self-serving ones.  that in order to be born again (and again) we need to die yet again (and then over again).

when i was in el salvador this past week with my family i had a lot of time to think & write & read; one of the things i thought about a lot is how desperate we are for an earthly king.  i am sometimes, too. i want someone to swoop in and tell me what to do and rescue me from my doubts & questions.  i want someone to put me & God & the whole kit and kaboodle back in a box so my faith can somehow be more manageable.

but then the feeling always subsides & i realize i do have a king.

a humble one, who says that i’m blessed when i realize my spiritual poverty (not when i’ve got it all nailed down).

a gentle one, who whispers to me that he understands my pain & struggle because he was human, too.

a wild & crazy one, who keeps reminding me that his ways will always be counter-cultural & harder but also better.

a not-the-way-kings-usually-look king, who says he’s not here to boss me around and make all my troubles go away, but rather that he’d be present in the midst of them.

a counter-cultural king, who calls me to spiritual poverty, mourning, mercy, meekness, justice and love as the path to freedom.

my hope is that over time we’d learn to quit crowning earthly kings, giving our time and money and souls to them, thinking they will save the day.

rather, i hope we can pick up our crosses and follow the one who really can.

ps: i really love this post by sarah bessey that i think points to what we expect of ourselves, too, when it comes to this king-hero-strength-means-big-and-amazing issue:  in which i have an evangelical hero complex.