what it's like…to have cancer 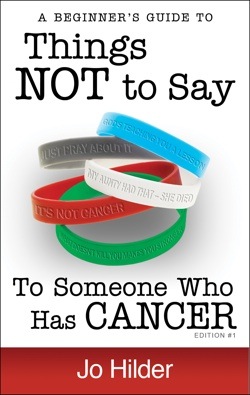 i have changed the names for the “what it’s like” interviews for safety, but today’s installment is a little different. my friend from across the oceans, jo hilder, recently wrote a book about this particular topic so i asked her to be part of this series and share “what it’s like..to have cancer.”  unfortunately, many of us know someone who is battling–or has battled–this mean disease.  her new book is “things not to say with someone who has cancer” and is available on amazon.  let’s listen in and learn.

describe a little bit about your background, faith experience, and your cancer diagnosis.

I grew up on the east coast of New South Wales, Australia, and became a Christian at age 13 at a high school bible study. I found being the only Christian in my immediate family a real struggle, and combined with the relentless bullying I suffered all through school it made for a miserable time. In church, I felt I had found a new “family” where I was loved, and encouraged in my passions.

I was no angel. I became pregnant to a guy from the youth group at 19. Ben was 18. We decided to marry. Those first few years were hard, but we had four more children together and a few adventures before settling down in a small seaside town and opening our own business. We joined the local community church where I became worship leader, and we sent our kids to the Christian school. We had a very nicely packaged little Christian family life going on.

Then one day, everything changed. I’d been feeling unwell for a few months, but my doctor kept dismissing me as an overworked, hysterical middle aged female. No tests, no examination. Every time I went to see him he shooed me out the door. Then one particular day in July 2003, I was sitting at my desk at work when a feeling of impending doom came over me. “You need to go to hospital” a voice inside me said, “or something terrible will happen.” Within an hour of arriving, an x-ray revealed a tumour the size of a saucer inside my chest. I was sent immediately to a bigger hospital, where they told me I probably had a kind of lymphoma–cancer. I was airlifted to a hospital in Sydney where I commenced three months of chemotherapy followed by two months of radiotherapy. That day in July, I left for work and didn’t get to go home again. Ben was literally left holding the baby – our children were aged 3 up to 14.  Thankfully our church stepped in to help. But from the time of my diagnosis, Ben commenced his own journey of shock, depression, trauma and addiction. Our lives were never the same.

what were some of the initial feelings that swept in when you realized your reality?

Strangely, when they first found the tumour my initial response was jubilance. Finding out something was wrong with me when my doctor told me my symptoms were was “nothing to worry about” was incredibly validating. My initial smugness toward my doctor quickly developed into anger and indignation, which took a long time to dissipate.

Amongst the natural feelings of fear and confusion about my future, I felt a huge responsibility. I felt I needed to guide people through my cancer experience, like God was holding me responsible for others not feeling confused or having their faith shaken. While I was away, I wrote a letter to my church, to be read on Sunday morning, reassuring everyone I was okay and “God was on the throne”.

In the first few days I was in hospital, I ended up in a room with a man who decided to stop treatment.  I felt responsible for sharing Jesus with him but couldn’t bring myself to do it. It was many years later I was able to forgive myself, and reconcile the fact my job in that situation was to be a very sick person, and not see my having cancer as a special mission God sent me on to save everyone else. I hadn’t realized how much pressure we Christians sometimes put on ourselves to make things “count.”

what were–and are– some of the real and raw things that you have cried out to God in this process?

Initially, I cried out to God one prayer only: “I want to see my eldest son marry. If you can grant me that, you can take me anytime you want.” I did see my eldest son marry six years ago. That was an emotional moment for me, but it’s taken a few more years to realize God has no intention of holding me to that bargain.

Over a period of years after I went into remission, Ben lapsed into alcoholism, and our marriage dissolved. His breakdown was the direct result of his being unable to draw on the faith he’d had since childhood for answers to his many questions, many of which centered on my cancer. In that dark time, I begged God to make my path straight – how much more trauma and loss could I endure? Our church didn’t know what to do with us – I felt as though all my years as a Christian now counted for nothing in their eyes.  In rehab, Ben was able to find the savior of his youth, and both his heart and our marriage were restored.

I asked God many questions.  I was anxious about the cancer returning. I was angry that people around me believed my story ought to have a “moral” I could teach them.

your new book is called “things not to say to someone who has cancer” and it couldn’t be a more perfect title for this question that i’ve been asking for this series– what are some things that people said or did that hurt, that you’d put in the category of “this is most definitely not a good idea to say to someone with cancer?”

The book is much more than simply a list of things not to say. I called it this because we’ve all said these things, and had them said to us. Hearts aren’t bad, but we have to find a better way. There must be something better than the old clichés “What doesn’t kill you makes you stronger!” or “God is trying to teach you something through this.”  Why do we expect people to “stay positive’? Why can’t they be whiny and scared? Do we really think God gives out cancer as a kind of lesson, like a mother teaching her child about fire by holding the child’s hand on the stove?

I recommend avoiding using clichés altogether because they have the effect of stopping the conversation from going any further. They are a language containment method. Once we’ve said something like “Oh, my aunt had that, and she died”, what on earth can you talk about next?

Instead of using clichés, in the book I suggest ideas for facilitating open conversations with a person who has cancer, allowing them to guide the conversation. Sometimes they want to talk about it, sometimes they don’t.

The book also dispels myths about what it’s like to have cancer. because we often see people through a kind of “cancer lens” which can diminish them as a victim or exalt them as a “hero”. This places an expectation on the person with cancer to behave a certain way, which causes all kinds of problems.

what are some things that people did say or do that really brought hope & life into this hard season?

The practical help we received in the first few weeks was amazing, especially meals. Our church was very organized and Ben and the kids were well fed while I was having treatment. The most impact in my life has come from folks who understood what I was going through and shared with me from that. If you can’t say “me too”, then the second most helpful thing might be “I’m here.” Many people with cancer say the thing they find helps the most is when someone is just “there” for them, without feeling the need to fill the air with chat or do a million helpful things. I think being there for someone is somehow quite perfect in most of the trials we face in life.

how has your faith been impacted?  what has this experienced changed in you related to your relationship with God, others, and yourself?

Everything has changed, yet when it comes down to it, what was there in the first place is still there. When I was a tiny girl, God spoke to me when I was afraid in the dark and said “I’m here.” I believed Him. When I had cancer, and was huddled alone in the dark, afraid to die and afraid to live, He spoke and said “I’m here.” That became enough. It became everything

I also came to believe, because of all I’d seen and experienced, God is not as “in control” as we have claimed. I choose instead to believe God is unequivocally good. There are things that happen which God cannot prevent, because if I am forced to believe he “gave” me cancer on purpose, I can’t reconcile it with my experience. He never left me. He helped me in my darkest times. Before, I treated God like insurance; I could somehow “purchase” a perfect life if I prayed and worshipped and obeyed. I did all those things, and still ended up with cancer and almost a broken family. To me, God was, and always is, more good than anything else.

what’s one piece of advice you have for “the church” when it comes to journeying alongside people with cancer?

Cancer is an area the church has pushed over to the “world” and said “these things aren’t supposed to happen to us, so you deal with it.” However, research supports that the incidence of cancer is one in two. And that means one in two Christians as well. Cancer happens, and not because of sin, lack of faith, or the devil. It just happens. It happens like earthquakes and accidents happen. And news flash – death happens too. To everyone. Death is not a mistake, an anomaly or a failure. It is possible to have a good death, and the church ought to be at the forefront when it comes to helping people have one.

We also need to stop treating cancer as if God does it on purpose to teach us something, and expecting the people who have it to interpret their cancer experience for the benefit of everyone else as in a  “testimony”.

thanks, jo. i love this line: “if we can’t say ‘me too’ then the next best thing is ‘i’m here.'” i’m always reminded how presence & no-advice-giving-or-fixing go a long way in these tough situations.  remember, you can get jo’s book here or here!