what it's like…to get kicked out of church 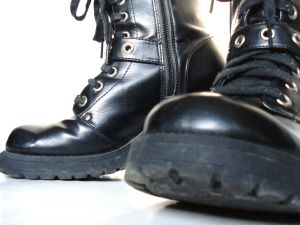 today is the first post in a series of posts i’ll share over the next month or so called “what it’s like…”  i am grateful for the many brave and honest friends who are journeying through all kinds of tricky places in their lives, spiritually, emotionally, practically. one of my #1 most favorite songs is what it’s’ like by everclear (warning: bad language). we can never know what it’s like to walk in another man’s shoes. but we can become people of compassion who try to understand what it’s like.  and we can also find great comfort in knowing there are others who share some of our same feelings.  when i first started getting honest about my past i can’t explain the relief i felt when i finally met some other women who understood some of my feelings in ways others couldn’t.  thanks for honoring these stories with kindness and respect.  if you want to read some other past blog interviews, too, i have several other series from a few years ago–a view from the margins, out of the darkness, and signs of hope.

this first one for what it’s like  is from my friend janell* (all of the names have been changed) and is a story near and dear to my heart.  a faithful follower of Jesus for years, she was kicked out of church and is finding freedom and hope in all kinds of new ways.  here’s what it’s been like for her.  my guess is some of you can relate.

describe a little bit about your background, faith experience, and what lead up to the “beginning of the end” when it came to church.

I began to follow Christ in earnest as a 12 year old girl.  Eventually I found my way to “Bible-believing churches” and became everything a stereotypical “good church lady” would be–a team player and woman who knew her place, and teaching women while carefully not appearing to know more than the pastor/leaders.  Our children were raised in a very Christian bubble as well.   In recent years, I had become a little edgy or restless, wondering if what we were doing “as the church” looked much like Jesus.

The end was dramatic and traumatic. A new policy was launched, and “feedback welcomed.” We saw the policy as mistreating people we loved, and we stated our objections strongly.   I naively believed my objections would be considered, since I was addressing brothers in Christ, friends, and long-time partners in ministry.

They responded from a strong power position, saying they would not answer us and that we were in spiritual danger for having criticized them. As we pursued communication and reconciliation, we were increasingly labeled as divisive and rebellious. Then our membership was removed through a phone call saying we had been “taken captive by Satan to do his will.” They followed up with a letter to all the membership calling us “false teachers,” and “savage wolves,” and saying that we were now to be “handed over to Satan to be taught not to blaspheme.” This was all done “in the name of God.”

it’s all so traumatic! what are some of the raw feelings you experienced during this season?

I had every feeling you would expect in a person just released from slavery, or any other refugee who is displaced.  I still alternate between “this is the worst thing that ever happened to me” and “this is the best thing that ever happened to me.”  There was relief and release to be out of something so painful and dysfunctional.  There was also a great sense of disorientation, being off-balance without solid footing; the loss of identity and purpose felt like a black hole.  Despair is one of the best descriptors.  There was devastation from loss and betrayal of close and trusted friendships, and a sense that all of life was in ruins.

Also, I experienced tons of shame. It took me to places where I could think of nothing else except what people thought of me.  All of these feelings created an emotional paralysis, disconnection from life and people, and so much fear of the unknown.

what did you want to scream out to church leaders? to God? to anyone who would listen?

To leaders – “Who in the bloody world do you think you are to treat us/others this way? Do you have any idea what it is to live and love like Jesus?  You look nothing like Him!

To some former friends who went missing – “Where are you? Did I mean so little to you?”

what are some things that safe people did or said that have really helped you keep moving forward?

A couple of friends patiently listened to my lament, vents, and pain day after day with no judgment or advice.

“What happened to you is wrong.”  It was a huge help to have people use the words “spiritual abuse” “reprehensible” and “heinous” for what happened to us.

“You are not alone.”  As hard as it is to hear other people’s church wounds, it was comforting to know others shared and understood this experience.

“I am here., followed by a demonstration of actually being there.

“I think you are —- (Awesome, noble, courageous, inspiring)”

what are some things that people said or did that hurt, that you’d put in the category of “these kinds of things really harm souls so don’t do or say it”?

Minimizing: implying that moving through this should be swift or simple, or that there is a time limit on the pain or grief of it.  “Move on,” “get over it,” “plug in somewhere,” “be sure you still use your gifts” or “All churches have problems.

Spiritualizing:  Statements that God is in control, God still has a purpose, etc. may be true but the timing was wrong.  God’s Word was used as a weapon against us soI couldn’t find comfort in Bible verses.   Reminders to forgive were painful too. These felt like telling an assault victim to be sure to forgive while the wounds are still fresh, instead of apprehending the criminal and making sure the wounds are bandaged.

how has your relationship with God, others, yourself changed over these past season?

I’m definitely not a “church lady” any more in any sense of the word!  I haven’t been in a church building in almost a year except for weddings and funerals.  I have learned lots about my own integrity and core values and have no regret for standing for what I did.  I have learned tons about soul care and self-compassion and still have far to go in that.  I realize now my false view that “dying to myself” meant having no opinions or beliefs of my own.

My faith is definitely in “deconstruction” and partial “reconstruction.” I am sorting and sifting a lot.  Some days, the only truth I hold to is “Jesus loves me, this I know”.

I am more ambivalent about relationships, and there is a pretty strong urge at times to isolate and not risk relationships.  I feel more cynical.

But now there are increasing moments when I see myself sliding down the slippery slope into an absolute ocean of grace, an ocean in which I can both rest and float, not drown or be pummeled by waves.

what words of hope do you have for others out here who have also “lost all they once held dear?”

I can’t think of anything more traumatic than being abused in the name of God.  It’s devastating.  My heart is with anyone who shares this experience.  There is a word picture that helped me.  In the horrible days of slavery in our country, there arose a network of people called the Underground Railroad who assisted escaped slaves in the journey toward freedom.  They placed lanterns outside their cabins and offered a safe place to receive nourishment, rest, and directions to the next cabin of safety.

In order to reach freedom, these escaped slaves travelling fearfully through the night had to place some trust in the kindness of people they had never met.  It was a risk, but without that risk they would never find their way to freedom.

And so it is for us.  Rescue and rest and encouragement come from unexpected places.  There is love and kindness in the world.  It may show up in places you are not expecting to find it, so keep your eyes open for those lanterns in the night.

thank you, dear janell.  i am so honored to know you and see your honest journey toward freedom unfold after such deep hurt.  i am so sad at what gets done in the name of God.  you are brave and inspiring and such an important part of this crazy beautiful underground railroad.

next week for this series:  what it’s like…when your child comes out as gay