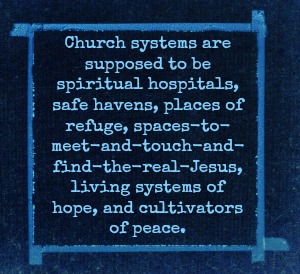 I have been fringe-following the whole Mark Driscoll thing for years.  In fact, over 8 years ago when we were starting The Refuge, some random person told my partner-in-this-crazy-endeavor about the Acts 29 Network and that “we should consider joining because they might have planting money for us.” He had no idea what Acts 29 was and neither did I. I told him I’d look it up. As I was reading their website, my stomach started getting sicker and sicker as the words “he” and “him” and “spiritual leader” kept scrolling through the pages. I couldn’t even get to the bottom before I clicked off it and started crying. It was early on in my stepping into leading as a female co-pastor and seeing the strength of the organization and the scriptural references behind their words was exactly what I did not need in my life.

What was most interesting about it, though, was that I had no idea what Acts 29 was.

So many people don’t.

It looks and sounds cool.

It’s slick and funded and supportive of new planters.

It’s been a growing network–cultivating a particular kind of patriarchal theology and practice all over the place in small and big ways.

After then making the connection of Acts 29 to Mark Driscoll, I watched a few videos and read a few things he had written and immediately swore off ever even touching anything related to him because it all made me feel so sad and mad.  The worst part isn’t his theology; lots of people have what I think is damaging theology.

What about the people who have joined in and gone along with this? The truth is that they are sincere, dear, amazing people who love Jesus and got sucked into a system that preys upon their faith and indoctrinates them in a very systematic yet subtle way.

Shame is a powerful controlling tool. A shame-based theology permeates our souls and makes us need our “fix from God” to somehow realign with him. It is actually a big draw because it becomes an identity–feeling bad and feeling good.The result is that people flock to church to get back on track spiritually week after week after week.  In a weird way, it’s like smoking. Tobacco companies put nicotine in to keep drawing millions of people back to the local store to buy a pack.

Shame works the same way—it keeps drawing countless numbers of people into church so that we can find some weird sense of relief by being attached to the rigid, clear rules of a shame-based system where someone is in charge of dispensing God to us.

The hardest part for me to swallow is how Jesus is all tied up in it and is being used in a way that was everything he was against.

But that’s what sick systems do–twist truth and try to control people instead of setting them free.

Church systems are supposed to be spiritual hospitals, safe havens, places of refuge, spaces-to-meet-and-touch-and-find-the-real-Jesus, living systems of hope, and cultivators of peace.

but alas, sometimes they have operated much more like corporations, prisons, movie theaters. and also like crazy you’ve-got-to-be-kidding-me-how-did-that-guy-get-them-to-do-or-believe-that cults that can look like rocking contemporary churches in cool cities around the US.

Unhealthy systems thrive on control and homogeneity. This is why “belief” and kick-butt-and-take-names leadership makes these systems go. It is nuts, really, how well it works. However, I do not think that has anything to do with God. I think it has to do with human nature and our desire for kings & celebrities & someone-to-just-tell-us-what-to-do-so-we-can-just-fit-in.

But the worst part about all of this is that shame & unhealthy systems create the perfect cocktail for spiritual abuse.  And spiritual abuse is Real with a capital R. Abuse does a number on our heads and confuses us.  It strips us of dignity and strength and so we think the way we’re being treated or pastored or lead is normal. The God trump card makes it even more crazy-making because when we resist or speak out or question or wonder or doubt, abusive systems immediately have the trump that puts us back in line and further complicates our ability to see or think clearly.

The easy thing that some people can say on the sidelines to people in abusive churches (and women or men trying to leave abusive relationships) is “Why don’t they just leave? Why are they so dumb to follow?” “What’s their problem?”

After being on the outside of an extremely unhealthy system for a good chunk of years now, I can say without a doubt–when you are in it, it sounds good, it feels good, it looks good. It works. It is your life. It is your kids’ lives.  It makes sense. It is all tangled up with God and our souls and it seems normal.

Right now, my heart hurts for all of the dear folks who are stumbling & tumbling & crawling their way out of shame-based unhealthy spiritually abusive systems during this season.

You are so not alone.

The road to freedom is long and rough and scary, but it’s so worth it in the end.

There is life on the other side.

And may we keep praying for all those who still think it’s normal & are stuck in a perpetual cycle of shame & control. Who are still following abusive leaders and giving themselves week after week to systems that power up and use them. Who have yet to taste freedom.

Oh, how I hope that over time the words of Toni Morrison ring true for those of us who once were in shame-based, unhealthy & sometimes spiritually abusive systems–may we get a chance to use our freedom to help set someone else free, too.

God, we need your help. There’s a lot of free-ing to be done these days.