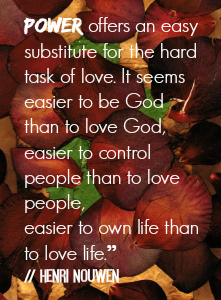 This month’s Synchroblog was centered on spiritual abuse & redemption. I didn’t have time to write earlier but it is a topic near and dear to my heart. At the Denver Faith and Justice Conference two weekends ago my friend Ryan Taylor shared about 5 stages of power, a blend of Janet Hagberg and Richard Rohr’s work on power. Respecting and understanding these stages is important and something I wish we would talk about more openly, more honestly, more reflectively in small and big pockets.

As we get in touch with our own story related to power, we connect to the bigger story about it, too.

Plus, all spiritual abuse comes from power issues.

However, lots of other roads also lead there. Inequality, injustice, church woundedness, oppression, broken relationship–all of these things usually, somehow-someway have power issues underneath.

It seems like there are several categories of people that cover most of us when it comes to power:

Today, I wanted to quickly walk through the 5 stages of power that Ryan shared at the conference. They will only scratch the surface, but I personally think they are so helpful to wrestle with and consider.

We can so easily get stuck in the first three:

Because Stages 1-3 of power keeps things manageable & contained. It’s linear. It’s easy to follow. It’s part of our work-hard-and-make-your-way-up mentality that so much of our faith and work is built on.

They are also a dangerous cocktail related to creating a breeding ground for spiritual abuse.

Fortunately, many of us have hit some kind of what Hagberg calls “The Wall” when it comes to power. We know something’s not quite right. We know the power we’ve ascribed to isn’t the Jesus-y kind. We know we’ve given ourselves over to something that just doesn’t satisfy. We can no longer just blindly follow certain kinds of leaders. We begin to confront our false self that thrives in Stages 1-3 and get in touch with our authentic souls.

I believe hitting a wall and moving out of Stages 1-3 is true spiritual and emotional maturity because we begin to gain power internally in the deep places of our souls, the kind I think Jesus was talking about.  I also think it’s the best way for abuse survivors to heal.

When we allow ourselves to let go of the safety of what I’d call “false power” we begin to move toward the next stage, which I hope is an area more and more of us are willing to bravely explore:

I hope we keep talking about and re-thinking power–our own power, the power of the systems so many of us have ascribed to, and the kind of power we are called to cultivate in this world as Jesus-followers-and-dignity-restorers-and-lovers-of-people.

Oh, we are in desperate need of transformed Stage 4 & 5 power in this world!

I hope you have a good Thanksgiving week. All 5 of my kids will be home starting tomorrow and so Jose and I will be in happy mommy and daddy vacation mode. See you next week.

peace and hope and prayers for ferguson, kathy