all roads lead to power. 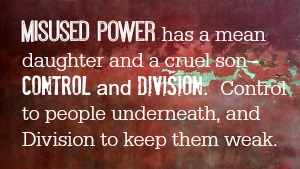 My friends living on the fringe.

Those who are trying to leave or heal from abusive relationships.

People I know from all over the place who are healing from “church”.

The realities of mental illness.

The women I intersect with who are meant to lead in church but probably never will have a chance.

How to keep The Refuge alive financially.

Rising violence in the world and how powerless I and so many others around me feel to do anything about it.

The deep divide between “us and them” in too many contexts to count.

Coffee, what I’m going to wear, and the long, crazy list of things I have to do that day.

There’s one common thread that runs through each of these things (except the last one)–power.

My loose working definition of power is “resources, value, voice, and leadership.” I’ve already written a lot about power over time–three words about it, that it’s not like pie, that it’s worth re-thinking, that we know how to live under or over each other but not alongside. I’ve talked about good power & how part of our role as Christ-followers is to pass it on and diffuse it, but that usually works better in theory than practice.

The reason I wanted to write about it yet again is that I think it’s an often-missing-yet-crucial ingredient in so many of these blog-church-faith-life-theology conversations. And it’s maybe the most important to have because all destructive roads lead to it.

Misused power and unbalanced resources are tied together.

I was reminded of Augustine’s famous quote this week at a meeting: Hope has two beautiful daughters–Anger and Courage. Anger at the way things are and Courage to see that they don’t remain as they are.

I love this thought, but we could re-write a much darker version centered on power: Misused power has a mean daughter and a cruel son–Control and Division. Control to keep people underneath and division to keep them weak.

In the gospels, Jesus wasn’t just railing on religion. He was calling out misused power, not only with “You’ve got it all wrong.” He also offered a better way. The Beatitudes and the way of the cross are good, solid starts.

It makes me think of what Henri Nouwen says in The Name of Jesus, his book on Leadership: ” What makes the temptation of power so seemingly irresistible? Maybe it is that power offers an easy substitute for the hard task of love. It seems easier to be God than to love God, easier to control people than to love people, easier to own life than to love life.”

Because theoretical rambling about power isn’t that helpful, I thought I’d share some off-the-top-of-my-head ways we can address issues of power more openly and seek God’s help for healing its dark side so its light and good can be illuminated.

So here they are, 5 possible ways to address issues of power:

What would you add?

New ways of talking about it.

New ways of reframing it (come to the Denver Faith and Justice Conference!).

New ways of diffusing it so it multiplies.

New ways of leading and shifting it so that dignity can be restored, relationships can be free, and systems can be living, thriving reflections of the Kingdom of God in all kinds of beautiful ways.